The Gospel of John describes three annual passover feasts during the course of Jesus' ministry and this is one reason for the commonly held belief that his ministry lasted for about three years. Luke tells us that Jesus was about 30 years old when he began his ministry. This page explains a few details of his first year of ministry, which begins with his forerunner, John the Baptist.

Jesus is baptized by John the Baptist

In the book of Malachi, there is a prophecy about a forerunner who would prepare the way for the Lord: "See, I will send my messenger, who will prepare the way before me. Then suddenly the Lord you are seeking will come to his temple; the messenger of the covenant, whom you desire, will come," says the LORD Almighty. - Malachi 3:1 (NIV translation).

This prophecy was fulfilled about 400 years later by John the Baptist, who prepared the way for the Lord Jesus Christ. When Jesus was about to begin his ministry, John the Baptist proclaimed to others: "Look, the Lamb of God, who takes away the sin of the world! - John 1:29 (NIV translation).

Jesus was about 30 years old. He had left the district of Galilee, which included the town of Nazareth, where he grew up, and had traveled to the wilderness of the Jordan River to be baptized. There, John the Baptist drew crowds as he preached and baptized.

As soon as Jesus was baptized, he went up out of the water. At that moment heaven was opened, and he saw the Spirit of God descending like a dove and lighting on him. And a voice from heaven said, "This is my Son, whom I love; with him I am well pleased." - Matthew 3:16-17 (NIV translation).

Jesus resists the temptations of Satan

After he was baptized, Jesus went into the desert and fasted (ate no food) for 40 days. Satan used this time to tempt Jesus. "Satan" is a Hebrew word that means "adversary," "enemy" or "devil." 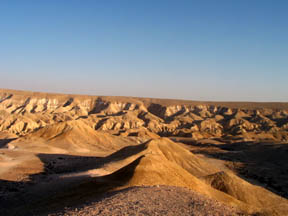 During the temptations, Satan uses the supernatural to find Jesus in the desert, then to transport Jesus to the top of the Temple in Jerusalem, and then to take Jesus to a high mountain. With each successive temptation, the loftiness of what Satan offers increases, as does the height from which he makes the offer.

Each time, Jesus resists the temptation and quotes scripture to rebuke Satan. In one instance, Jesus quotes from Deuteronomy, chapter 8. It is important to note that Deuteronomy 8:2-3 reminds us that the Israelites spent 40 years in the desert where they too were tested for their obedience to the will of God. This is another example of the book of Matthew pointing out similarities between the life of Jesus and the history of Israel.

Jesus and some of his disciples went to Cana, a town in the district of Galilee, to attend a wedding party. His mother, Mary, also attended. The host of the wedding party did not have enough wine for everyone and this was considered a very embarrassing situation. Mary intervened on behalf of the wedding host and told Jesus about the problem. Jesus then miraculously changed six barrels of water into wine for the wedding party.

Of all the miracles that Jesus performed, this one might seem minor. But it did accomplish important things. It shows that Jesus has concern for people's problems, even if they are not major problems. And it showed Jesus' disciples that he was able to perform miracles.

Throughout the four Gospels (the Bible's books of Matthew, Mark, Luke and John) there are descriptions of 34 miracles performed by Jesus. But all told there may have been thousands, as sometimes when surrounded by a large group of people, the Bible states "He healed them all." These 34 miracles are a sampling of what he did and the compassion he felt for people. Everything from raising the dead, controlling nature, healing the sick, casting out demons, and providing enough food from a few baskets of bread and fish to feed thousands. Click here for summaries of the 34 miracles.

Jesus went to holy city of Jerusalem, the most important city in the Jewish homeland, and visited the Lord's Temple. When he arrived he saw that many people were selling animals and exchanging money in the Temple courts. This angered Jesus because the Temple was intended to be a place to worship God, not a place for commerce. Jesus made a whip out of some strands of rope and chased the merchants out of the holy Temple. Jesus said to them:

Jesus talks of God's love and plan of salvation

Jesus explains to Nicodemus what a person must do to have salvation and eternal life. Jesus says: "For God so loved the world that he gave his one and only Son, that whoever believes in him shall not perish but have eternal life. For God did not send his Son into the world to condemn the world, but to save the world through him. - John 3:16-17 (NIV translation).

Jesus tells a Samaritan woman about "water of life"

As Jesus and his followers traveled through Samaria, Jesus rested at a place called Jacob's Well. There he met a Samaritan woman and spoke to her about the "water of life." He told her:

In this discussion with Samaritan woman, Jesus showed that the word of God was meant to be shared with all people, even enemies (the Samaritans and the Jews were hostile towards one another). And, he showed that it was to be shared with men and women, Jews and Gentiles. (Gentile refers to people to who are not Jewish).

During the early part of Jesus' ministry, he went to the district of Galilee, where Jews and many Gentiles (non-Jews) lived. Jesus preached and performed many miracles there. He became a beacon for many as he shed light on the word of God. This was foretold by the prophet Isaiah about 700 years beforehand:

". . .in the future he will honor Galilee of the Gentiles, by the way of the sea, along the Jordan-- The people walking in darkness have seen a great light; on those living in the land of the shadow of death a light has dawned." - Isaiah 9:1-2 (NIV translation).

When Jesus again visited the town of Cana in the district of Galilee, a royal official begged Jesus to heal his son who was very ill. Jesus said:

"Unless you people see miraculous signs and wonders, you will never believe." - John 4:48 (NIV translation).

Jesus then sent the royal official on his way, telling him that his son would recover. The official later learned that his son was healed and he and his family became believers.

Jesus announces that he is the Messiah

Jesus went to a synagogue (a Jewish place of worship) in Nazareth and read from the scroll of Isaiah to the people gathered there:

The Spirit of the Sovereign LORD is on me, because the LORD has anointed me to preach good news to the poor. He has sent me to bind up the brokenhearted, to proclaim freedom for the captives and release from darkness for the prisoners, to proclaim the year of the LORD's favor and the day of vengeance of our God, to comfort all who mourn, - Isaiah 61:1-2 (NIV translation).

Then, Jesus announced that he was the Messiah that Isaiah spoke of:

Then he rolled up the scroll, gave it back to the attendant and sat down. The eyes of everyone in the synagogue were fastened on him, and he began by saying to them, "Today this scripture is fulfilled in your hearing." - Luke 4:20-21 NIV translation).

Jesus is rejected as the Messiah

Shortly after Jesus announced that he was the Messiah, the people at the synagogue in Nazareth rejected him as the Messiah:

"All the people in the synagogue were furious when they heard this. They got up, drove him out of the town, and took him to the brow of the hill on which the town was built, in order to throw him down the cliff. But he walked right through the crowd and went on his way." - Luke 4:28-30 (NIV translation).