The third year of Jesus' ministry is sometimes called the "Year of opposition." Some of the community leaders attempted unsuccessfully to challenge Jesus' authority and were becoming increasingly antagonistic. Jesus continued to perform miracles and large crowds continued to seek him.

Soon after Jesus had learned that John the Baptist had been beheaded, Jesus went out into a boat to pray in solitude. But a large crowd gathered at the shore to meet Jesus. He felt compassion for the crowd, so he went ashore and healed the people in the crowd who were sick. 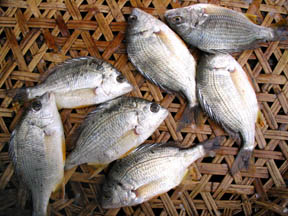 It was getting late into the day, and Jesus' disciples were concerned that the crowd did not have any food. Jesus told his disciples to feed the crowd, but the disciples said they only had five loaves of bread and two fish. And the crowd was very large with 5000 men, as well as many women and children.

As explained in Matthew 14:19-21, this is what happened next: " ... he directed the people to sit down on the grass. Taking the five loaves and the two fish and looking up to heaven, he gave thanks and broke the loaves. Then he gave them to the disciples, and the disciples gave them to the people. They all ate and were satisfied, and the disciples picked up twelve basketfuls of broken pieces that were left over. The number of those who ate was about five thousand men, besides women and children." (NIV translation).

Of all of the miracles that Jesus had performed in healing people, turning water into wine and in feeding a multitude of people with a single basket of food, the miracle that made the disciples proclaim that Jesus was the Son of God was his miracle of walking on water. Jesus told his disciples to go out into the water in a boat while Jesus went to a private place to pray. Later, Jesus walked out to the boat and startled the disciples. They thought they were seeing a ghost walking on the water. But after they realized that it was Jesus, they worshiped him, saying, "Truly you are the Son of God."

Jesus prophesizes his own death

Similar to other prophets in the Bible, Jesus foretold events that later happened. He prophesized that Jerusalem and the Temple would be destroyed and that the Word of God would be preached to every corner of the world. These prophecies were fulfilled. But, Jesus is different than the other prophets of God. For one, Jesus was the subject of many of the prophecies given by the others. And two, Jesus fulfilled some of his own prophecies. As explained in Matthew 16:21-26, Jesus prophesized his own persecution, death and resurrection.

In Matthew 17:1-8, the Bible says: After six days Jesus took with him Peter, James and John the brother of James, and led them up a high mountain by themselves. There he was transfigured before them. His face shone like the sun, and his clothes became as white as the light. Just then there appeared before them Moses and Elijah, talking with Jesus. While he was still speaking, a bright cloud enveloped them, and a voice from the cloud said, "This is my Son, whom I love; with him I am well pleased. Listen to him!" When the disciples heard this, they fell facedown to the ground, terrified. But Jesus came and touched them. "Get up," he said. "Don't be afraid." When they looked up, they saw no one except Jesus. (NIV translation).

In Matthew 18:21-22, the Bible says: Then Peter came to Jesus and asked, "Lord, how many times shall I forgive my brother when he sins against me? Up to seven times?" Jesus answered, "I tell you, not seven times, but seventy-seven times."

Jesus heals a man who was born blind

Jesus raises Lazarus from the dead

In John 11:1-44, the Bible gives another account of Jesus raising someone from the dead. In this case, it is a man named Lazarus. When Jesus was told that Lazarus was seriously ill, he said:

"This sickness will not end in death. No, it is for God's glory so that God's Son may be glorified through it." (John 11:4 NIV).

A few days later, Jesus traveled to the tomb of Lazarus, where Lazarus had been for four days. Jesus went to Martha, Lazarus' sister, and:

Jesus went to the tomb and called out for Lazarus, who then rose from death to life and walked out of the tomb.

A selection of Bible prophecies explained